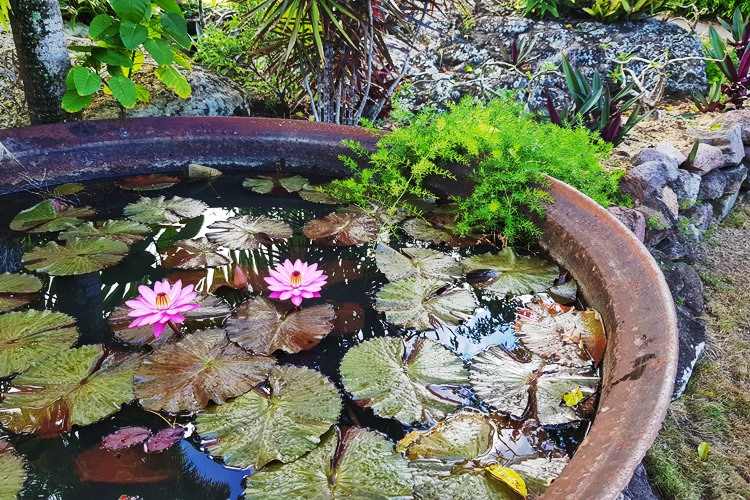 We have ponds of water throughout our garden where the waterlilies grow, where the herons perch, where the wild donkeys and roaming livestock come to drink when the yard is still. They are made from raw iron; demi-spheres of various sizes, some broken, some tipped upside down and some whole, filled with water, either raised above the ground or sunken into the earth. They range in size from three to six feet in diameter and are sometimes positioned strategically to catch the falling rain, or ornamentally as a focal piece, and sometimes they are just accidental features of the landscape locked into position where trees have grown around them.

We call these big pots ‘Coppers’. Centuries ago, they were brought to these islands with a terrible effort and used in the boiling rooms where cane juice was turned into sugar by slave labor in a torturous heat. Out of the furnace of slavery came sweet delicate crystals that shaped the economy of an age. Out of these iron pots came the wealth that helped build an empire.

Once upon a time this island was a place of mad industry, when sugar was worth more than gold. Plantations were built, estates were established, windmills and stone chimneys were erected. Nevis was one of the richest places on the planet. Every forest was cleared, cane was grown on every available bit of land, from the water’s edge to the mountain top. The profits from sugar were enormous, but the wealth of this age was shared by very few though it shaped an empire and influenced the global economy.

The sugar trade slowly died after the abolition of slavery. The once powerful planters fell into destitution and plantation houses were abandoned. The fires in the boiling houses went out and the windmills and the chimneys began to crumble.

The emancipated men and women, shaped by hard times, turned their struggles to their own survival and to building a nation. The ‘copper’ pots were removed and scattered around the island and repurposed for collecting rain to water animals and crops. But time has passed and even this purpose has been lost. They are now mostly just ornaments in the garden. Their value lies not so much in the adornment of water lilies and birds but in the book of stories one could write about the lives that have surrounded them in the last four hundred years.