The History of the Hermitage 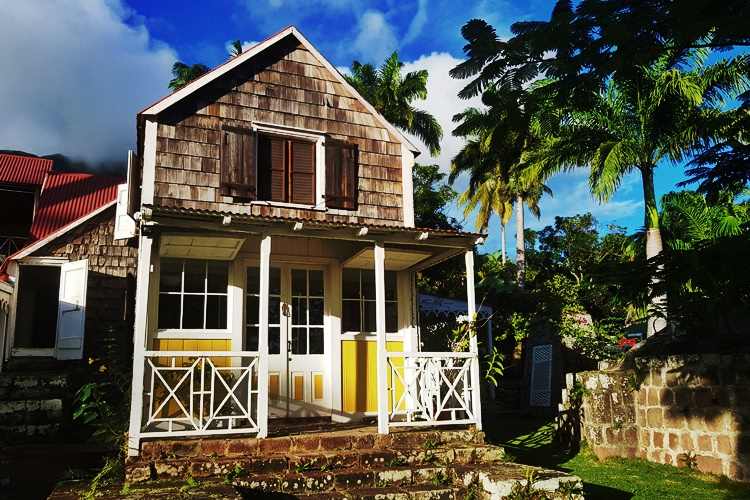 The Great House at Hermitage was built sometime between 1670 and 1740. Nevis island lore calls it the oldest house on the island, and Jack Bertholet, author of the 1984 book, CARIBBEAN STYLE, declares it the oldest surviving wooden house in the Caribbean. In twenty years of studying Caribbean architecture from Surinam to Cuba, he had never found an older wooden house.

It was built as a small farmhouse before the days of large sugar plantations. The original owners were Pembertons from England who likely experimented with various crops such as indigo, tobacco, cotton, spices, and eventually sugar. It was a small plantation of less than 100 acres, situated 800 feet above sea level. The land is stony and strewn with boulders with good soil in between. It was terraced into beds for cultivation; the extensive dry stonewalling remains one of the features of the plantation. There is no evidence of a sugar mill or factory, but there was a small animal mill down hill for grinding cane with horses, mules or oxen.

The strength and longevity of the house are due to the uncommonly strong mortise and tenon construction (heavily pegged at all joints), steep roof pitch design, and extraordinarily durable lignum vitae timber framing. These heavy beams came from original Nevis trees, now extinct.

The property would have originally included the Great House, stone kitchen and ovens, water cooler and cisterns, and other dependencies. The Main House is essentially as it was in the days when Nelson and Hamilton resided on the island. It comprises less than 2,000 square feet and is in the shape of a cross aligned on the points of the compass.

In later years the family prospered to own other estates all the way to the sea, and the original house was kept as a hillside residence for invalid members of the family. It passed from Pembertons to their cousins, the Maynards of Nevis in 1948, and in 1971 to the present owners, the Richard Lupinacci family, originally from Bucks County, Pennsylvania.

The Lupinaccis are keen fans of traditional St. Kitts and Nevis vernacular architecture, and there are now eleven additional buildings on the site–all of them in the traditional style. Some are actually entire cottages moved from other locations in Nevis and restored at Hermitage. More recently, four entirely new cottages have been built copying the original methods exactly. Having survived many hurricanes, the Hermitage has proved the soundness of its construction and strategic positioning – with absolutely no structural damage to the old style buildings.

Today, The Hermitage is a plantation inn and continues to offer traditional island hospitality and lifestyle for up to 35 guests. The property reflects the owner’s interests in island life, with its original cuisine, reconstructed cottage rooms, collection of antiques, old-fashioned gardens, horses, carriages, and local crafts and arts. It has become a “must see” site for every visitor to the island.